How to spot a fake hipster 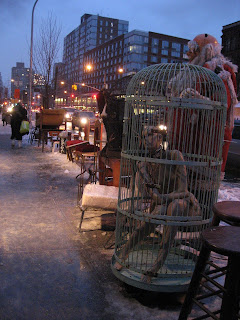 Last week I published a post on this blog (in French) describing my disillusions with "A", a former American classmate of mine that, at first, I thought was different and interesting, but who turned out to be what I’m going to call a “fake hipster”. I met "A" back when I was an exchange student coming from France (obviously!) to the East Coast, and back when I was still fairly easily impressionable… "A" had blond curly hair that would fly in the wind when he was riding his bike on the campus main walk; he wore flannel shirts and vintage Tees, and he constantly carried an Olga camera dangling around his neck. In the world of hipsters, perfect score! But as I got to know "A" better, and with the help of my anthropology-student-best-friend-with-a sharp-eye-for-judging-character, I realized that "A" was a total fake! I have now been living in New York for three years, including in the East Village, a.k.a hipsterville, and I am well-aware that coming up with a decisive definition of the concept of the hipster is almost mission impossible. And too make things even more complicated, there is a very fine line between a hipster and a fake hipster. But let me try to give you a few hints that should help with not being fooled by another "A" coming your way!
1. The fake hipster lives in Williamsburg… once upon a time the neighborhood of hipsterdom, now a place where apartment buildings look edgy only because an interior decorator made them look that way, and where French tourists go when they want to feel cool.
The hipster lives in a neighborhood that is still gentrification-free and comparable to the Bushwick of 2009, the Williamsburg of 2000, the Bowery of 1993, the Tribeca of 1984, the Soho of 1976, the Greenwich Village of 1952…
2. The fake hipster is pale and thin, he wears ridiculous glasses and a curly mustache… basically he looks like an Urban Outfitters sales person from 2011.
The hipster is pale and thin, he wears ridiculous glasses and a curly mustache… basically he looks like an eccentric clock salesman from the 1911s*.
3. The fake hipster buys polyester clothes for hundreds of dollars in vintage stores thinking it’s a good deal.
The hipster owns a sewing machine and knows how to transform her Midwesterner* aunt’s tablecloths from the 1980s into summer dresses.
4. The fake hipster wears a beard because his girlfriend got him “Dude No. 1 Beard Oil” for Christmas (price tag: 65 dollars for 25 mml)
The hipster wears a beard because he doesn’t need to shave every day.
5. The fake hipster follows a gluten free diet, not because of her allergies, but because it will make her look like an anorexic without actually being one.
The hipster is a vegan because she genuinely cares about cruelty towards animals, and the ban on foie gras is her new crusade.
6. The fake hipster would rather spend a small fortune on an organic fair-trade triple shot soy latte from a fancy coffee place than step foot into a Starbucks café… until he finds himself on a trip abroad realizing that the only place in the whole country where he can get his soy latte is at Starbucks.
The hipster makes coffee at home, and drinks it from a mug his girlfriend made for him in pottery class.
7. The fake hipster spends 300 dollars for a night at the Ace Hotel and feels that he's living like a woodsman.
The hipster spends 300 dollars on camping equipment and supplies for a week and feels that he's living like a woodsman.
8. The fake hipster learned to speak Spanish as a kid with his nanny from Puerto Rico.
The hipster learned to speak Spanish as a college kid back-packing in Latin America with some friends.
9. The fake hipster idolizes Vanessa Paradis because she is a French “bobo” and she is married to Johnny Depp, the multi-billion dollar pirate.
The hipster didn’t know who Vanessa Paradis was until he saw her reenact the finale of Dirty Dancing in The Heartbreaker.
10. The fake hipster knows all about the bands performing at The Coachella Music Festival every year.
The hipster knows all about The Vieilles Charrues Music Festival, and dreams of going every year.
11. The fake hipster doesn’t vote because all politicians are corrupt. He is a fake anarchist and an aspiring socialite.
The hipster votes even though he knows most politicians are corrupt. He is a true activist and an aspiring socialist.
12. The fake hipster buys art.
The hipster makes art.
See the difference?

This list can go on, leave your suggestions in the comments section or on the Marion en V.O Facebook page!
*Copyright: BR
*Copyright: JL
Recommended readings:
Why the Hipster Must Die from Time Out New York
Look at This Fucking Hipster Basher from the author of The Hipster Handbook
What Was the Hipster? from New York Magazine
The Trustafarians invade Williamsburg from The New York Times
In French:
Anti-héros : les hipsters sur Tracks de Arte
Blog Bobo de merde

For fun:
How to Throw a Hipster Wedding in 5 Easy Steps